What is gilded glamour? From the moment the Met Gala’s 2022 theme was announced, people have tried to unpack its meaning. For some, the phrase calls to mind Edith Wharton’s New York; others find it reminiscent of the blingy, streetwise look of the early 2000s. Given the room for interpretation, guests at tonight’s ceremony were free to chart their own course. They did so gleefully, dressing to the nines in custom designer outfits and archival vintage.

As always the red carpet was filled with lengthy trains, giant jewels, and extroverts looking to make their mark. The sheer number of attention-grabbing looks meant that breaking from the norm was the only way to truly stand out. Dakota Johnson lives in Alessandro Michele’s creations, but the fringed sequin catsuit the designer whipped up for her appearance at the Met felt fresh. Likewise, Erykah Badu’s layers of beaded Marni suiting—plus a towering hat—was a spectacular twist on the star’s favorite silhouette.

Sustainability took center stage, with multiple celebrities opting to wear vintage. Each of Nicolas Ghesquière’s Louis Vuitton muses—Hoyeon Jung, Emma Stone, and Cynthia Erivo among them—arrived on the carpet wearing a piece from the brand’s archives styled to mesh with their tastes. Adut Akech went back even further by selecting an emerald green Christian Lacroix gown from Shrimpton Couture and wearing it with a supermodel swagger.

Revisiting these old-school looks proved how forward-thinking the work of designers like Lacroix and Ghesquière is, but the night’s biggest archival coup belonged to Kim Kardashian. Moments before the carpet was set to end, the reality star emerged in the Jean Louis gown Marilyn Monroe wore in 1962 to serenade John F. Kennedy on his birthday. A history lesson with a modern verve, it brought an eventful evening to a close. See the best-dressed celebrities from the 2022 Met Gala red carpet below, and revisit the Livestream from the red carpet for all of the looks from fashion’s biggest night.

Kate and Lila Moss in Burberry

Cardi B in Atelier Versace 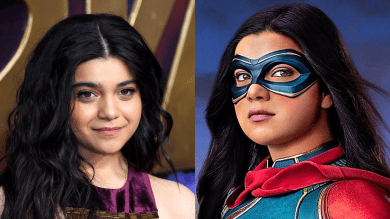